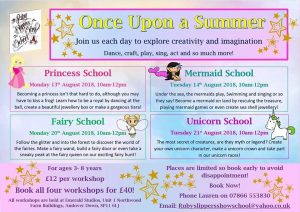 Join us each day to explore creativity and imagination

Dance, craft, play, sing, act and so much more

Princess School – Mon 13th August – 1000 – 1200 – Becoming a princess isn’t that hard to do, although yo umay have to kiss a frog! Learn how to be a royal by dancing at the ball, create a beautiful jewellery box or make a gorgeous tiara.

Mermaid School – Tues 14th August – 1000 – 1200 – Under the sea, the mermaids play. Swimming and singing or so they say! Become a mermaid on land by rescuing the treasure, playing mermaid games or even create sea shell jewellery.

Fairy School – Mon 20th August – 1000 – 1200 – Follow the glitter and into the forest to discover the wold of the fairies. Make a fairy wand, build a fairy door or even take a sneaky peak at the fairy queen on our exciting fairy hunt!

Unicorn School – Tues 21st August – 1000 – 1200 – The most secret of creatures, are they myth or legend? Create your own unicorn character, make a unicorn crown and take part in our unicorn races.

Places are limited on each workshop so book early to avoid disappointment.

Phone Lauren on 07866 553830 or email rubyslippersshowschool@yahoo.co.uk